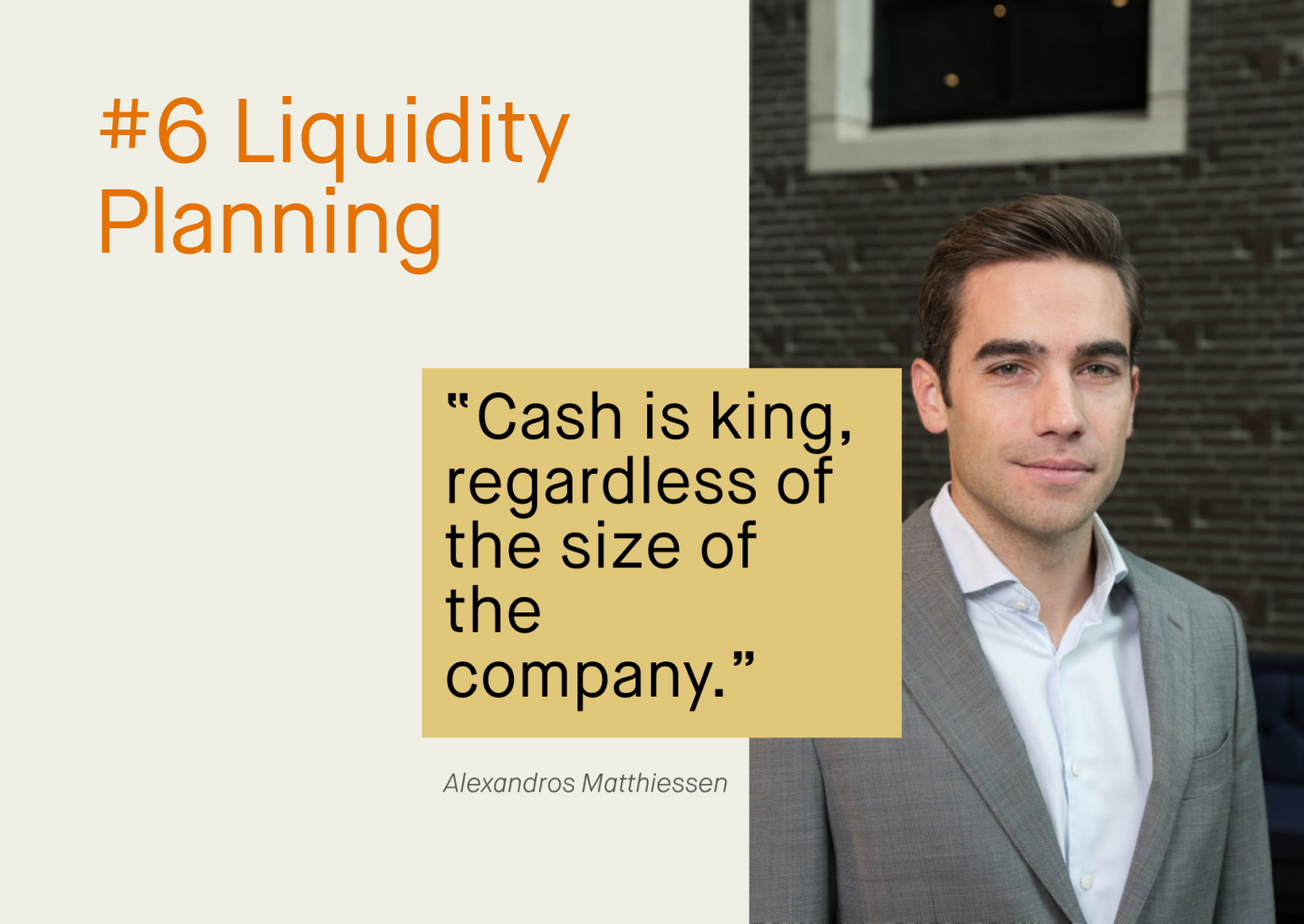 COVID-19 has brought with it a unique set of challenges that no business could have been entirely prepared for. That means essential practices, like liquidity planning, become much more complex as a result of the ongoing uncertainty.

Offering advice on navigating such a task, are Alexandros Matthiessen, co-founder of the EY Finance Navigator and Dennis Brouwer, transaction and finance expert.

Alexandros highlights the key area's startups must be addressed through this period, insisting that cash management is ultimately what will see your business come out of this crisis.

“Cash is king, regardless of the size of the company. For startups, what you see very often when you talk about liquidity or cash flow management, it boils down to how are we spending? What’s our burn rate per month? What’s our runway? Those are terms that are very common in the startup world.”

Under normal circumstances, Alexandros explains that generally there are two main reasons for a company building a financial forecast.

“One is when they’re looking to raise funding, especially when talking about startups and scaleups. The first thing you want to know is how much funding will you need? And the second is at what point in time? Normally you would align those to your business plan, so they’re tied to specific milestones.

“The other reason is purely from a performance and operations perspective. As a management team, for your shareholders, you want to be in control. You set out a certain budget and then you observe any variances.

“Raising funding takes time. The first step is you identify how much money you need and by when. Then you need to close it. In a normal situation, when you talk about VCs in the Netherlands, that can be anywhere between a three month period and a year.”

Of course, though, these are not normal circumstances, which means your approach will most likely need to be altered.

Dennis explained that rather than the traditional forecast timescales mentioned above, he would shorten those checkpoints in order to monitor assets more closely.

“In an ordinary course of business, you would forecast your first year on a monthly basis and then after year two, move on with years. What we are currently doing is narrowing that scope down to 13 weeks, a quarter of a year.”

The next step would be exploring which payments your business has already committed to and which could potentially be moved around to extend your runway.

“One dynamic that we build into it, is confirmed and unconfirmed payments or receipts. What are my confirmed payments? Which investments are fixed and I can’t move them? And which part of my cash flow is unconfirmed so I can move it around? I think that’s the key dynamic of what happens to your forecast in a crisis like this.”

2 - How do you plan for something so uncertain?

It’s a question with no concrete answer right now, what you can do though, is prepared for various scenarios as best you can, Dennis explains.

“What we currently do, is you have to work with scenarios. Very often that’s a best-case, a worse case and a worst-case. Sometimes you see scenario four, which is a fallback; an absolute crisis situation for the company.

“Make sure that you map all your stakeholders, manage them and be transparent. People don’t like to be surprised. A lot of suppliers and employees are willing to help companies, the only thing that people don’t want in these circumstances is to be surprised.”

Alexandros expands on the process of scenario planning and the need to act fast: “When you have actions tied to the scenarios, it’s very clear from a management and funding perspective what steps need to be taken so you don’t go into your fallback scenario.

“It’s key that as an entrepreneur you’re taking action relatively fast. That means at some point you need to make choices that are difficult. However, if you look at it from a long-term perspective, it may be crucial for your business to make it out. That is what it comes down to basically if you’re talking about business continuity, you will need to make choices. It’s better to make a tough choice that allows you to stay.”

3 - When should I start planning an exit strategy?

Putting a fixed timescale on something like this is extremely difficult at the best of times and ‘exit’ can mean a different thing from business to business.

“The quickest I’ve seen it is within three months, to do a transaction like that. You need a proper planning phase and that really depends on the maturity of the company. I would say you need at least a year from planning to execution.” Dennis explains.

Alexandros adds that any exit strategy also depends on your future vision as an entrepreneur.

“It varies a lot depending on the company. It depends on your plans as an entrepreneur, maybe it makes sense to sell earlier rather than investing another two years of your time. I think to have a plan for an exit, or more than one plan is important.”

Being transparent with stakeholders is essential throughout this period. The effects of coronavirus will be felt for months and even years, so preparing yourself for multiple scenarios is a must. Businesses should be agile and face up to tough decisions where needed, as ultimately, this could be the difference in survival and will allow you to plan more accurately.