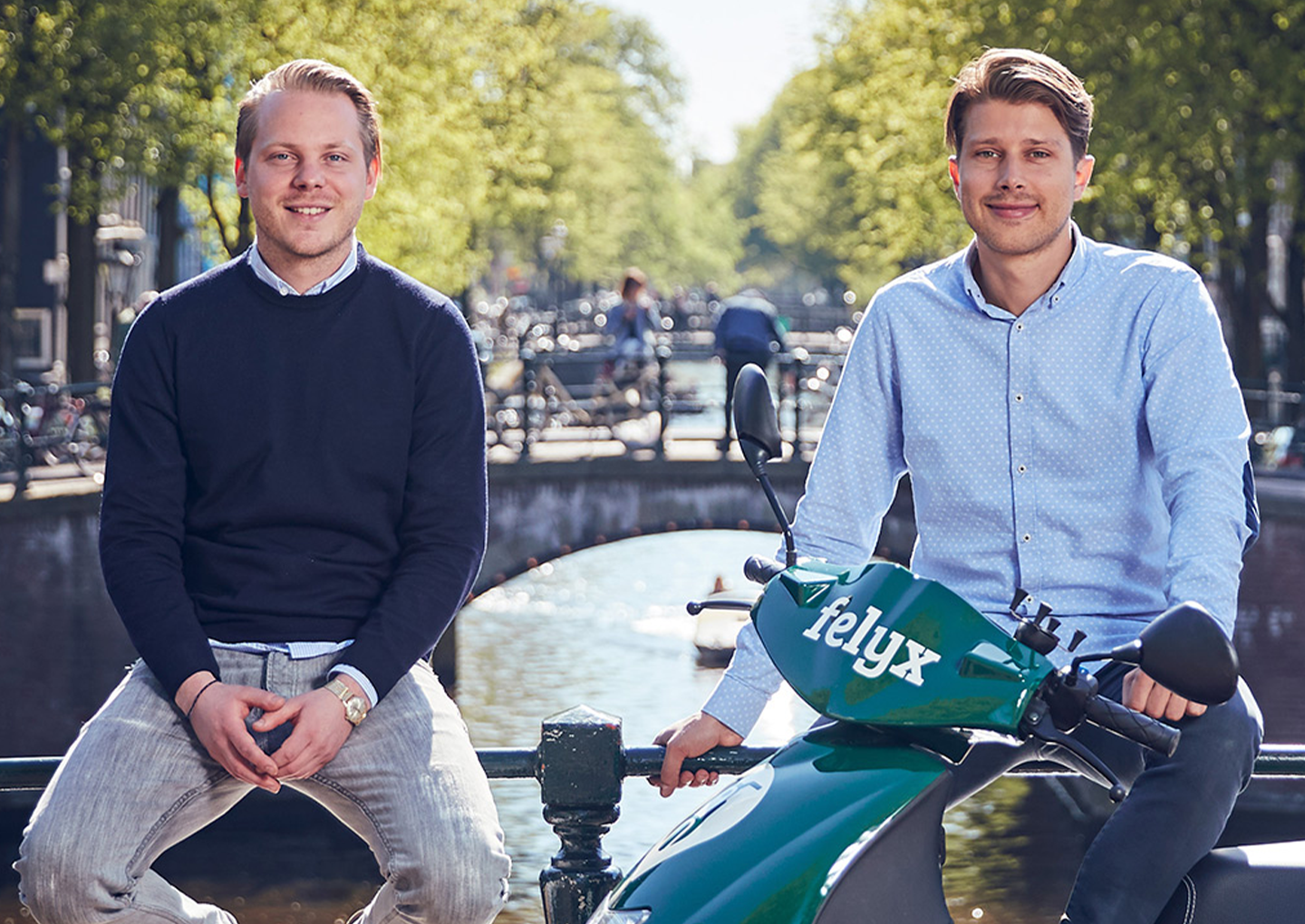 When it comes to sustainability-focused startups, most people would first think about wind turbines, solar panels, or at least industrial-scale batteries and energy saving solutions. But in the grand scheme of things, a startup that swaps thousands of fossil fuel-powered car trips per day for electric moped rides may be making an even greater contribution in the energy future of the planet. Enter Felyx, a Dutch-founded e-moped sharing company with a fleet of dark-green painted vehicles available in Amsterdam, Rotterdam, The Hague, Eindhoven, Delft, Groningen, and Brussels. The first company of its kind to start working in Benelux on this scale. Felyx also claims to have one of the highest numbers of daily rides among European e-moped operators.

“We started the company [together with Maarten Poot] in the summer of 2017, but we quit our jobs much earlier, in April of 2016,” said Quinten Selhorst, co-founder and CEO of Felyx. “We needed that time to actually make the business model work and get the funding in place.”

Felyx has raised more than €20 million in funding so far and employs over 100 people. About 70 of them are working in the startup's Amsterdam headquarters, while the rest represent the local teams in each city where Felyx operates.

As of November 2020, the company had eliminated more than 780 tonnes of CO₂ by providing a greener alternative to car rides.

The product offering of Felyx is similar to that of other companies in the micromobility industry. To start riding an e-moped, you only need to install an app, verify your driving license, and add a payment method. The rides are normally priced at €0.30 per minute; it is, however, possible to get lucky and pay less thanks to dynamic pricing, which is controlled algorithmically to encourage users to travel — and therefore move the vehicles — towards a certain part of town where more e-mopeds are required.

In every city where Felyx scooters are available, the company doesn't make use of the “gig economy” but makes a point of hiring a local team of mechanics, fleet operators, managers, and customer support representatives. Whenever there's a moped with a (nearly) depleted battery, an employee in Felyx's electric van will come by and swap it.

As for the hardware itself, the Dutch startup uses e-mopeds produced by the Chinese manufacturer NIU. The vehicles in the startup's fleet aren't the same as the ones you could buy in a store, Selhorst said. Without getting much into details, he mentioned that all shared e-mopeds are “fine-tuned towards the liking of Felyx to make them a better product for sharing services.”

What makes Felyx stand out of the crowd in terms of business is the fact that the company is currently EBITDA-positive on the group level. Simply speaking, the startup turns a profit at an operating level; in case of Felyx, it means that it doesn't need to subsidise e-moped rides in order to keep growing its user base.

Surely, it's not all smooth sailing for Felyx, although some of the challenges are not what one would've expected. For instance, the COVID-19 pandemic and the series of lockdowns imposed throughout the year across Europe didn't impact the startup too badly — and even eventually led to an increase in revenues.

“At the beginning of the first lockdown, we saw a major drop in revenue and the amount of rides, because people just didn't go anywhere anymore,” Selhorst said. “However, we were  quite surprised to see how much revenue we still received.

“And then at some point in May, we noticed that there were more rides booked on the platform than before the lockdown. Since then, we've seen better results each week than we had predicted beforehand.” 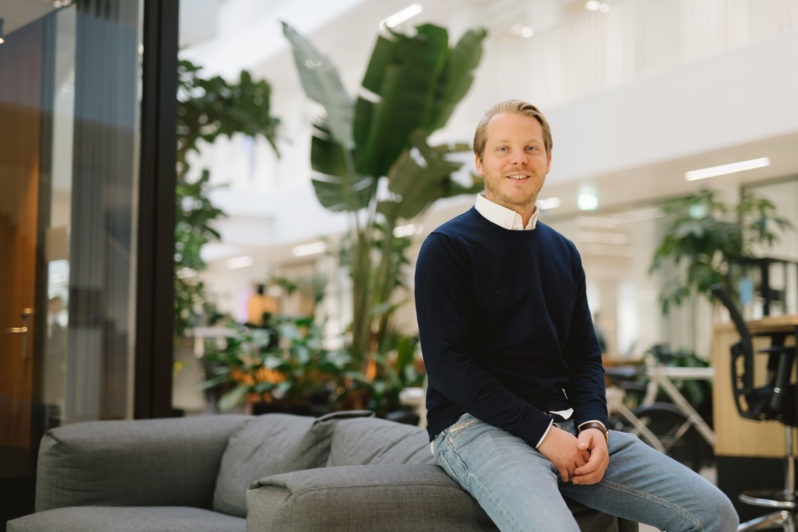 Another pain for Felyx is the regional regulations regarding e-mopeds and shared micromobility in its home country. The fragmentation requires the startup to adjust its technology stack based on the local data sharing requests from municipalities, as well as adjustments in local mobility-as-a-service APIs, which makes the operation less scalable than it could and should be, Selhorst explained.

To get support in solving these and other challenges, Felyx became part of this year's cohort of Techleap.nl Rise programme, which helps startups based in the Netherlands get ready for rapid scaling.

“The program has been incredibly insightful for me personally,” Selhorst said. “I got very concrete, practical advice that both myself as well as my management team could apply straight away. Also, I've made a few changes in the company's organisational structure based on the advice I received from a few scale icons.”

Speaking about the immediate plans of Felyx, Selhorst mentioned a planned geographic expansion outside the Netherlands, though didn't go into detail as to which cities could expect to see the green e-mopeds on the streets next. The startup is also actively working with municipalities in its home country to consolidate its position on the market.

The startup is currently competing with a few companies providing shared e-mopeds in the Benelux — but Selhorst is happy with the fact there are multiple players on the market.

“The most important thing to understand is this is a very new industry, it's really in its infancy,” he said. “And since it's heavily regulated, which I think is a good thing, you see that there is way more demand than supply. To take Amsterdam as an example, we're only allowed to operate 350 mopeds in a city with over 1 million people. With a customer base that we have there, it'd make sense to have a fleet of 2,000 to 3,000 vehicles.

“The service in general gets better if a competitor enters that specific market, because then there are already 700 e-mopeds instead of 350. The most important thing is that with more vehicles on the market, there's a better value proposition for customers, which leads to a bigger ‘pie’ being created for everyone to have a piece of.”

Unlike many other players, which went down the diversification path and introduced new vehicle types, such as e-bikes or e-scooters, Felyx is planning to stick with e-mopeds for now.

“Those other vehicle types are very different and require a different approach,” Selhorst said. “We want to stay laser-focused on e-mopeds; we know we're really good at it.”