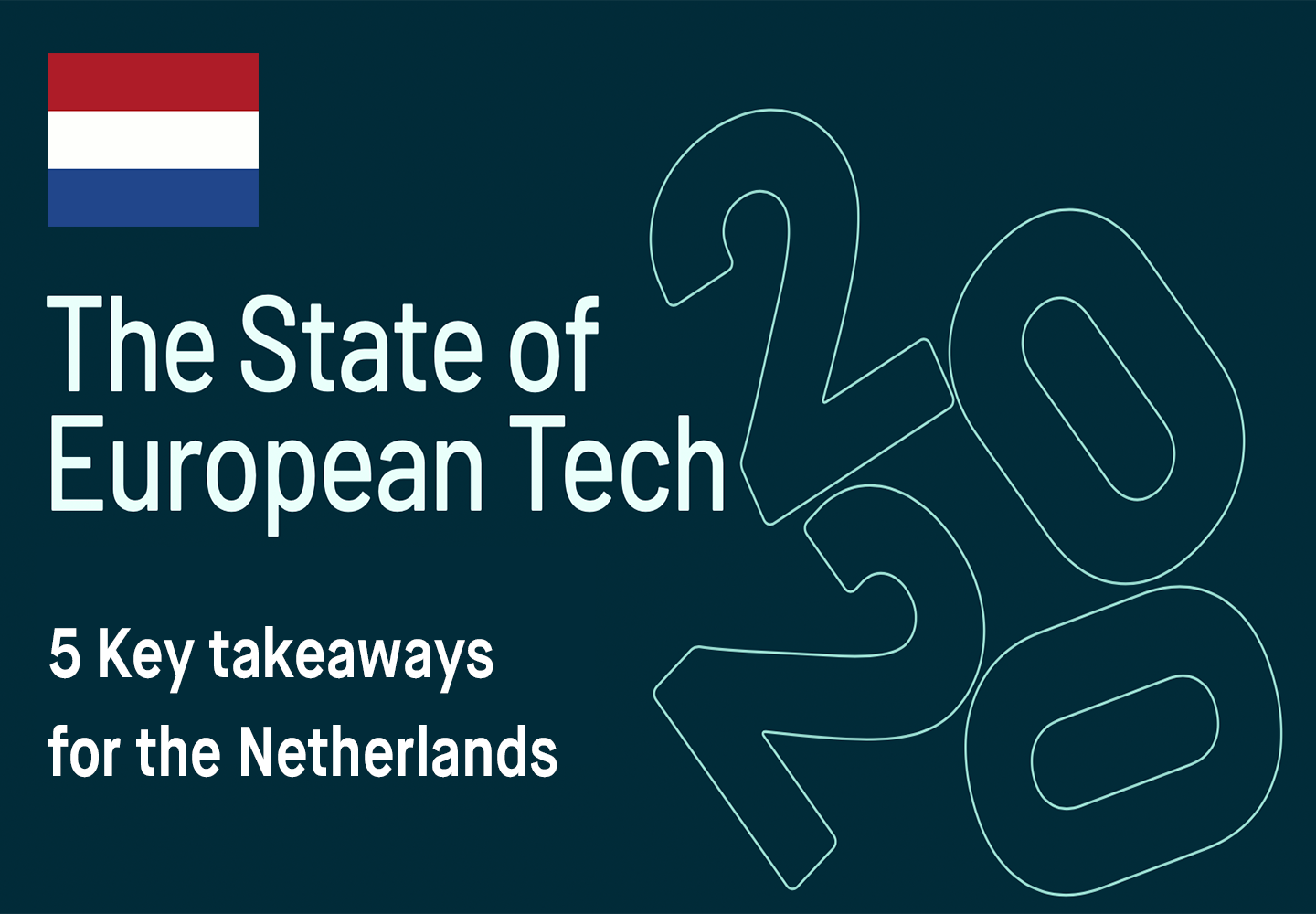 What has 2020 brought to the Dutch tech ecosystem? What are the learnings we can take to 2021? We have summarised the key trends and data insights from the Atomico State of European Tech 2020 Report in relation to the Netherlands.

Key trends on a European level

A drop in capital investment

Despite a highly volatile macroeconomic climate and the uncertainty created by the global pandemic, the European tech ecosystem has been resilient throughout 2020. The strength of investment since September - an all-time record month for Europe - has been remarkable, leaving the chance for 2020 to set a new record once again.

Looking at the country-by-country trends, France is the only one of Europe's three largest markets to grow in 2020 (from 4.8B in 2019 to 5.19B in 2020). Despite steady growth since 2016, the Dutch market has seen a decrease of capital investment by $169M in 2020 due to the pandemic. Nevertheless, the final numbers are likely to be higher considering that the 2020 data has been annualised based on the September numbers. For the record, this December we had Catawiki score €150 million in growth funding and Maastricht-based Mosa Meat close Series B funding at around €61.8 million. 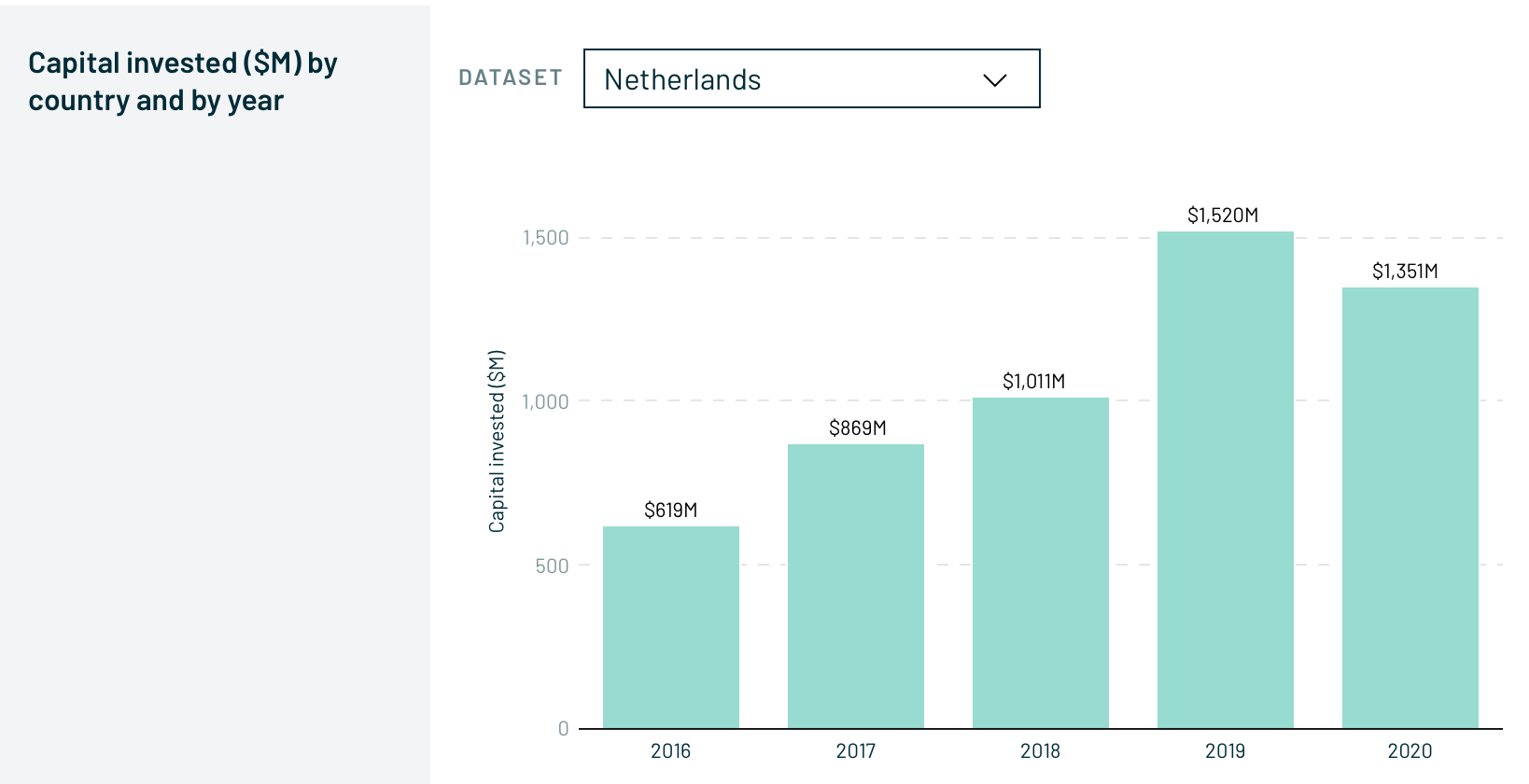 Now let’s look at the bigger picture. Before COVID-19, the Netherlands has shown smaller year-by-year and cumulative capital investment numbers since 2016, compared to the UK, Germany, France, and Sweden. For perspective, the Netherlands accounts for a cumulative investment of $5.3B since 2016, compared to $22.8B in Germany and $47.9B in the UK. Therefore, we can argue that the Dutch tech ecosystem can definitely benefit from greater capital investment and smarter capital allocation from big (inter)national funding players.

This way, to be able to even the market cap distribution but also maintain our leading position in the ranking, it is essential to further maximise our support of Dutch tech startups and facilitate the growth of the next generation of unicorns.

Undoubtedly, COVID-19 has significantly impacted the European tech job market. While in some countries such as Sweden, Denmark and, notably, the US, tech positions declined in volume relative to the broader job market, Spain and the Netherlands have seen an opposite trend.

In 2020, the Netherlands has had a slight increase of 0.1% in tech job postings compared to 2019. This trend might be caused by the importance technology has had in the digitalisation of our work and lives. Moreover, the share of tech job searches in the Netherlands has grown by 18.7% from Oct 2019 to Oct 2020. Such steep growth can well be driven by increased demand from newly-available talent, but most likely reflects an increased interest in tech due to its perceived position as a COVID-19 beneficiary or a relatively safe haven within a challenging job market.

Another positive trend regards the decreased share of tech jobs that are hard to fill. The Netherlands has seen a decrease of 7% from 2019 to 2020. Meanwhile, the share of software engineer job postings classified as hard to fill has also declined by 11.5% from Oct 2019 to Oct 2020.

The spike in available tech talent creates a positive growth and innovation climate for the Dutch tech companies. As a result, it is important to capitalise on these trends by further shaping an attractive ecosystem to thrive in. To do so our Talent team has been highly focused on running and further developing (inter)national talent programmes, as well as an internal recruitment programme for scaleups which would provide better access to tools and knowledge for successful and more efficient recruitment.

Though there are various diversity and inclusion gap areas within the Dutch tech ecosystem, we will outline the most striking ones to us.

Arguably an even more striking finding lies in the share of deals that women-only/mixed founding teams have raised in the Netherlands in 2020. After a noteworthy improvement in 2018, the share of rounds women-only founding teams have raised decreased by 1.5% in 2020. The same trend is shared by gender diverse teams with a decrease from 11.5% in 2019 to 11.3% in 2020.

Therefore, in 2021, it’s of utmost importance to ensure a more gender-equal distribution of capital across the Dutch tech ecosystem. These stats further underline the value of #Fundright as an initiative in creating a more diverse startup ecosystem in the Netherlands. Only through a diverse and inclusive environment, the Dutch tech ecosystem will be able to reach its full potential. 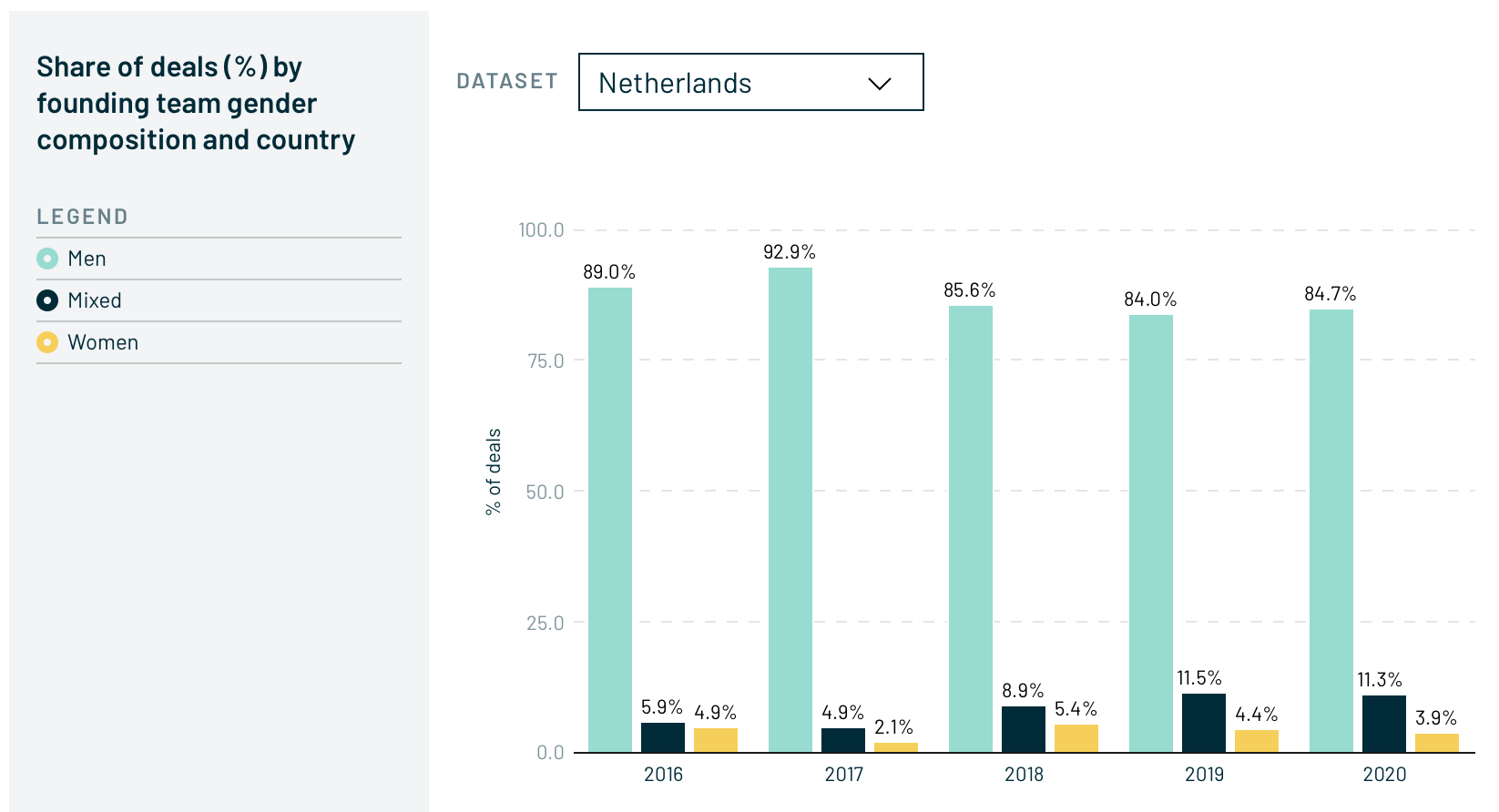 The COVID-19 pandemic, if anything, has facilitated closer collaboration between policymakers and the tech ecosystem. One of the core reasons for such change has to do with technology playing a crucial role in enabling economies to adapt to the realities of virtual living and working.  On that note, #KickstartNL manifesto became an important step towards driving extra attention to the needs of the tech sector and mobilising collaboration between Dutch policymakers, investors, and startups themselves.

On a European scale, the Netherlands got the 5th place in COVID-19 relief programmes (€400M direct loans through RVO, BOM, InvestNL), while France is leading the ranking with a €5.2B COVID-19 response.

In Europe, SMEs play an important role in public procurement. One way governments have supported smaller firms is by introducing COVID-19-specific procurement rules. SMEs are a helpful category to look at, as increased SME spending is likely to benefit tech startups as well.

The Netherlands was recognised among the biggest winners based on estimated SMEs share of the total annual contract value for public healthcare procurement (77% in 2020, compared to 39% in 2019). 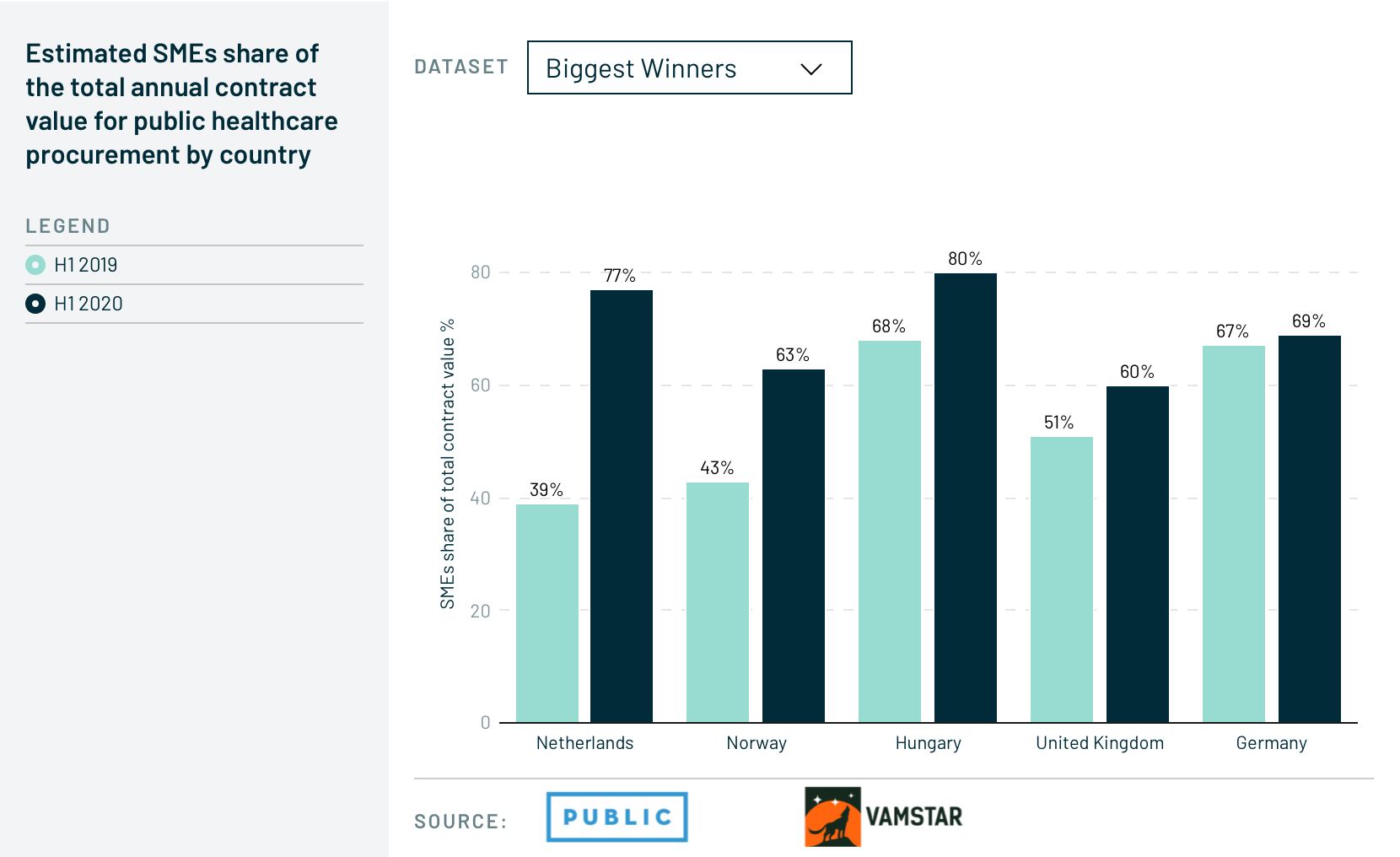 What can we conclude?

2020 has been a year of contrasts for the Dutch tech ecosystem. While it has brought positive changes to the tech jobs market, it has negatively affected the level of capital investment. The hurdles and overall uncertainty of this year have shown us the essential need for:

We invite you to read the full ‘The State of European Tech 2020’ report by Atomico and supplement our findings with your own.